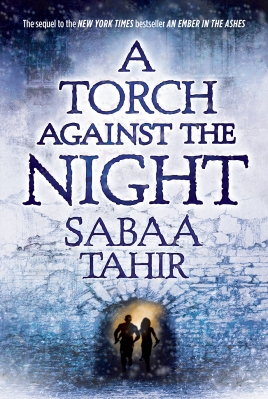 Elias and Laia are running for their lives. After the events of the Fourth Trial, Martial soldiers hunt the two fugitives as they flee the city of Serra and undertake a perilous journey through the heart of the Empire.

Laia is determined to break into Kauf—the Empire’s most secure and dangerous prison—to save her brother, who is the key to the Scholars’ survival. And Elias is determined to help Laia succeed, even if it means giving up his last chance at freedom.

But dark forces, human and otherworldly, work against Laia and Elias. The pair must fight every step of the way to outsmart their enemies: the bloodthirsty Emperor Marcus, the merciless Commandant, the sadistic Warden of Kauf, and, most heartbreaking of all, Helene—Elias’s former friend and the Empire’s newest Blood Shrike.

Bound to Marcus’s will, Helene faces a torturous mission of her own—one that might destroy her: find the traitor Elias Veturius and the Scholar slave who helped him escape…and kill them both.

I picked up this series for the first time three days ago. I devoured these two books – literally devoured them. I do feel obligated to warn readers, however, this series is very dark. There is so much heartbreaking violence that sometimes it is hard to read.That being said, I loved this book. It was full of twists and turns that kept me guessing constantly.

The three main characters, Laia, Elias, and Helene are all relatable and likable in their narratives. I will start with Helene. Even though, to me, her feelings were the most genuine in An Ember in the Ashes (her love of Elias was unwavering), I didn’t love her. I felt as though she only cared about serving the corrupt Empire, and Elias. In this book, reading things from her point of view really helped me understand and come to love her as a character. The struggles she faces, the choices she has to make, sucked me in. At the end of the first book, when she swears fealty to Marcus, I was completely unsure how to feel – would she use her closeness to the new Emperor to overtake him? Or would she continue to be unwaveringly loyal to her corrupt and murderous Empire? When Marcus tasks her with finding and killing Elias, her internal struggle made her more human to me, more relatable. Her emotional state at the end of the book leaves me wondering what path the author will take with her in the final book. Whatever path Helene ends up on, I really really hope it involves Harper! We didn’t get to see much of him this book, and I’m hoping that changes in the final book – Helene deserves a happy ending. Maybe Harper is involved in it somehow?

While Helene hunts Elias and Laia, they have their own obstacles to overcome. How to save Darin from Kauf with Helene trailing them? With an entire Empire searching for them, they have to come up with innovative ways to reach the prison. Elias does not disappoint. I enjoyed his character in the first book, but his selflessness and constant need to do the right thing in this book really drew me to him. He became my favorite character. His struggles are constant – how could they not be with such a corrupt and evil mother on his trail? Each new challenge he was issued, he faced with a steely determination. He really uses his Mask training and cunning in this book and I loved it. Not only is he trying to help Laia, he spends most of the book struggling with his inner demons and the people he had to kill in the trials and during his escape.

Finally, Laia. I am unsure how I feel about her at the end of this book. I can’t express my frustration in its entirety without giving away spoilers, but at times I found myself trying to yell at her through the book. Her poor choices in relationships aside (ugh Keenan), she remains a likable character. She is just single-mindedly focused on Darin while I feel that the other characters are better at seeing the bigger picture. I found myself counting the pages in her chapters because I was eager to return to the POV of Helene and Elias. After the way this book ended, I look forward to seeing what her next step is. I’m sure she plays a major part in the revolution, I just haven’t figured out yet what it is.

My Takeaway: This series has quickly become one of my favorites. I look forward to the final installment in the trilogy and can’t wait to see what will become of these characters! While it is a dark and violent series, the author has crafted an interesting world and incredible characters.

**PS – I am geeking out BIG TIME! I will be meeting Sabaa Tahir this weekend at an Austin Book Festival!! I am counting down the days!!**