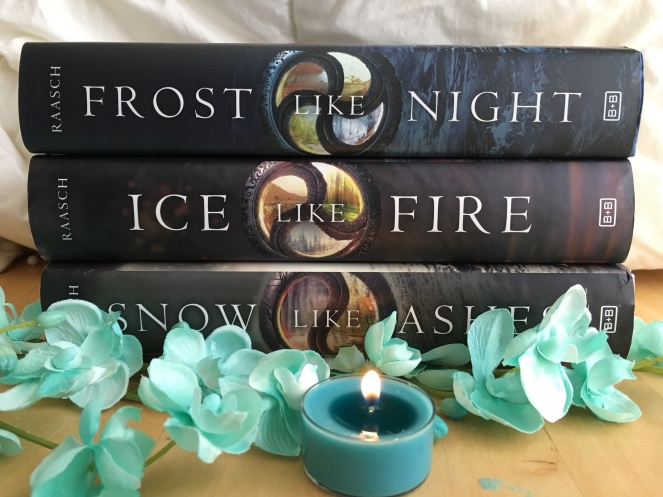 Angra is alive, his Decay is spreading—and no one is safe.

Meira will do anything to save her world. With Angra trying to break through her mental defenses, she desperately needs to learn to control her own magic—so when the leader of a mysterious Order from Paisly offers to teach her, she jumps at the chance. But the true solution to stopping the Decay lies in a labyrinth deep beneath the Season Kingdoms. To defeat Angra, Meira will have to enter the labyrinth, destroy the very magic she’s learning to control—and make the biggest sacrifice of all.

Mather will do anything to save his queen. He needs to rally the Children of the Thaw, find Meira—and finally tell her how he really feels. But with a plan of attack that leaves no kingdom unscathed and a major betrayal within their ranks, winning the war—and protecting Meira—slips farther and farther out of reach.

Ceridwen will do anything to save her people. Angra had her brother killed, stole her kingdom, and made her a prisoner. But when she’s freed by an unexpected ally who reveals a shocking truth behind Summer’s slave trade, Ceridwen must take action to save her true love and her kingdom, even if it costs her what little she has left.

As Angra unleashes the Decay on the world, Meira, Mather, and Ceridwen must bring the kingdoms of Primoria together…or lose everything.

As I’ve mentioned in previous reviews, I keep all of my favorite books in hardcover on a special bookshelf. This entire series will always hold a place on that shelf – I absolutely see myself pulling it off the shelf once every few years to re-read it. One of my favorite things about this series is that it was written from the perspectives of three characters I absolutely adored: Ceridwen, Mather and of course Meira. My review may contain minor spoilers in the form of quotes – I also discuss Meira’s main love interest a bit.

Angra wanted to break me.

But he only made me unbreakable.

Throughout this series, Meira has struggled with who she is. She is continually forced to reconcile who she is as a person with who she needs to be as the queen of Winter. In this third and final installment, Meira really comes into her own. I loved her time spent with Rares and Oana – not only did Meira receive the loving parental figures she had been searching for her whole life, she learned how to accept all aspects of herself. She finally became the Warrior Queen she strove to be. And this is only within the first QUARTER of the book. Frost Like Night was unbelievably action packed and the odds constantly seem stacked against Meira, but she is unflinching and unwavering in her knowledge that she can defeat Angra. She is an incredible character – confident, yet humble. She genuinely wants what is best for her people and those she loves. Even though she struggles with what she knows she needs to do to save the world, she pushes forward and never lets it break her.

“No matter what happens, I will never, not in a thousand tragic outcomes, ever regret loving you.”

While I was a bit unsure about Mather in the first book of this series, I have really come to adore him as a secondary character and love interest. What stands out for me is that Sara Raasch didn’t make Mather JUST a love interest. In the first two books in the series, it is clear that he and Meira have feelings for each other, but he has his own plot line. I enjoyed all of the characters in the Thaw and their dynamic as a group. They played a major role in this series and I was glad that Meira and Mather had them around as a support system. They were devoted to Mather even though he was longer king – I honestly think that they helped him get over the loss of his title. Best of all, Mather and Meira’s story was perfect – they loved each other but grew as people and fought their own demons before finally getting together. I don’t love him as much as Rhys from ACOMAF, but I mean who can compete with Rhys, really?

I couldn’t decide on a Ceridwen quote to accompany her portion of my review as she had so many great ones throughout the book. She was the perfect secondary character – she provided plenty of comedic relief in Frost Like Night and her love story was touching. I enjoyed reading her chapters – the final battle from her point of view really showed how strong Angra was and lent suspense to an already tense couple of chapters. Like Meira and Mather, she faced internal struggles of her own – guilt over her relationship with her brother and lack of trust in her relationship with Jesse. I enjoyed seeing her work through all of these struggles throughout the book and really enjoyed her ending.

My Takeaway: Frost Like Night was a fantastic end to a trilogy that I plan to re-read many times in the future. I will wait with bated breath for the next book Sara Raasch releases. I love how she connects her readers to every character by writing about the demons and doubts that plague many of us on a daily basis.