The premise of The Blazing Star is undeniably unique, how did the idea for it come to you?

The Blazing Star has been in my head in one way or another since I was a kid.  It’s a much better rendition of the first book (if you could call it a book… it was 60 pages of craziness) that I wrote when I ten years-old. I actually still have a copy somewhere. The story was about three friends who journeyed to an alternate dimension and discovered they were faerie princesses. Again, it was very much something a preteen in the 90’s would write. Fast-forward a few years. Right after I finished grad school, I was getting into YA and writing again. I decided that the bones of the faerie princess story were actually decent, and would fit well with a YA adventure swirling in my head. Add a dash of historical fiction and ancient Egyptian mythology, and five years later, here we are.

What upcoming projects can fans of your writing look forward to?

Thanks for asking! I’ve had an exciting 2016. The Blazing Star actually isn’t my first publishing cred. I was fortunate to have a short story selected for Crossed Genres’ Hidden Youth anthology. The short story I wrote for the publication is a paranormal romance called “North,” based on my great-grandparents.

I’ll also have another short story about pageantry published by the Young Adult Review Network (YARN) in 2017. I’m also currently working on the second book of The Blazing Star series.

If you’re looking for me in the meantime, you can always listen to my podcast Introvert Problems or my Other Works page on my website.

Many authors say that their characters speak to them as they write their books, if your characters could speak, how do you think they would feel about the way you told their story?

I think my characters would be okay with their portrayals. In all honesty, art imitates life as I’m one of three girls, there are definitely hints of myself and my sisters in my main characters of Portia, Alex, and Selene. I will have to ask my family members what they think and get back to you on their thoughts of character portrayals.

Story wise, I would hope that the main character, Portia, would think I told her story fairly. Alex, who is catching a lot of flak from readers for being somewhat self-centered, probably would want me to remind everyone that this book is from her sister’s POV, which can be a little biased.

What is your all time favorite guilty pleasure book?

Guilty pleasure book? I feel like this question is designed to get me in trouble LOL. I don’t think I have a guilty pleasure book, but there are a few books that I will read over and over again. One of them is the Heretic Queen by Michelle Moran, which is historical fiction but reads like YA. The protagonist definitely has her triumphant moments, which I love. I also love anything from Cassandra Clare, particularly the Infernal Devices series. I’m a Will Herondale fan.

How can we keep up with you?

Order The Blazing Star on Amazon or my website 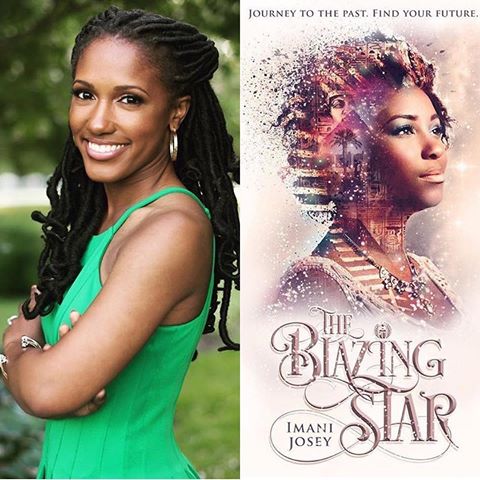