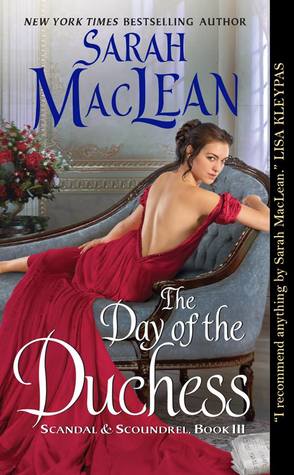 The one woman he will never forget…
Malcolm Bevingstoke, Duke of Haven, has lived the last three years in self-imposed solitude, paying the price for a mistake he can never reverse and a love he lost forever. The dukedom does not wait, however, and Haven requires an heir, which means he must find himself a wife by summer’s end. There is only one problem—he already has one.

The one man she will never forgive…
After years in exile, Seraphina, Duchess of Haven, returns to London with a single goal—to reclaim the life she left and find happiness, unencumbered by the man who broke her heart. Haven offers her a deal; Sera can have her freedom, just as soon as she finds her replacement…which requires her to spend the summer in close quarters with the husband she does not want, but somehow cannot resist.

A love that neither can deny…
The duke has a single summer to woo his wife and convince her that, despite their broken past, he can give her forever, making every day The Day of the Duchess

Guys, I don’t know what is happening to me! Maybe I’ve turned into a big ol softie, or maybe books this year are just exceptionally good. Either way – Sarah MacLean managed to pull another 5 Star review out of me.

MacLean’s books were actually recommended to me via Goodreads as a huge Elizabeth Hoyt fan. I started reading MacLean’s Rule of Scoundrels series last week, and within a couple of days had devoured them. Though every book of hers that I have read has been fantastic, and wholly engrossing, The Day of the Duchess is the first book of MacLean’s that I feel is a 5 star read.

In the first Scandal & Scoundrel book, we were introduced the the Duke of Haven when Sophie, the heroine of book one, found him in a compromising position with a woman NOT his wife (her sister). Sophie, of course, called him out and pushed him into a fish pond. At the time, I honestly didn’t see how Malcom could ever be seen as a redeemable character. I really, truly hated him in that first book.

Through of a series of well placed flashbacks, MacLean managed to erase all of my hatred of Malcom. His and Seraphina’s story is an absolutely heartbreaking one. This book was, without a doubt, the best second chance romance I have ever read.

What really made this novel such an outstanding one was its basis in reality. There were no crazy villains trying to keep Mal and Seraphina apart – they were separated by their own fears and trust issues. There was never a doubt in my mind as a reader that they didn’t love one another. I did, however, find myself doubting that they could overcome their past.

Where a lot of second chance romances fall short for me is character growth. In my opinion, characters need to show that they have changed for the relationship to work the second time around. The changes in Malcom and Seraphina during their separation were profound – Malcom grew out of his arrogance, and began to realize that he needed to set aside his ego in order to love Seraphina the way she deserved to be loved. Seraphina learned to be independent, and was able to find her passion without Malcom. These changes in character made their coming together both more meaningful, and more tame than their original courtship.

Honestly, I could rant and rave about this novel for days. I went through an entire box of tissues reading it, and I already want to read it all over again. Sarah MacLean has shown with every book she’s written that she knows how to tug on heartstrings, and will remain one of my favorite authors. The Day of the Duchess stands out to me as her best work to date, and has certainly made its way into my all time favorites list.

My Takeaway: Read. This. Book. It will break your heart and then put it back together. Sarah MacLean’s next series, coming out in 2018, can not be released soon enough! I need it now please and thank you.