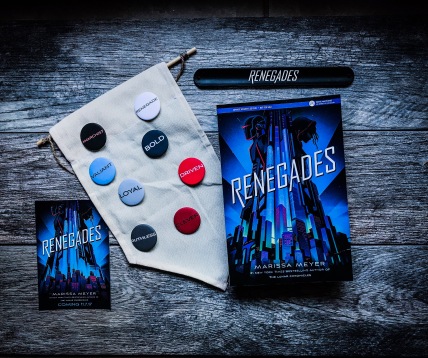 The Renegades are a syndicate of prodigies—humans with extraordinary abilities—who emerged from the ruins of a crumbled society and established peace and order where chaos reigned. As champions of justice, they remain a symbol of hope and courage to everyone…except the villains they once overthrew.

Nova has a reason to hate the Renegades, and she is on a mission for vengeance. As she gets closer to her target, she meets Adrian, a Renegade boy who believes in justice—and in Nova. But Nova’s allegiance is to a villain who has the power to end them both.

I actually won this ARC in an AWESOME contest that Marissa Meyer held about a month ago. There aren’t even words to describe how thrilled I was, not only to create a super villain that I really connected with, but to get the chance to read one of my most anticipated reads of 2017 in advance. For those of you who saw my contest entry, but haven’t heard the news, I wanted to share: for nanowrimo I’m actually writing my super villain’s story! If you want to learn more about it feel free to message me on Instagram (@asthebookends) or email me!

I was honestly a little worried that the characters would have relatively predictable powers. You know the ones I’m talking about: invisibility, super strength, flying, etc. While there were a few characters like that, for the most part each character had an incredibly unique ability. I perhaps enjoyed Adrian’s power the most. As Sketch he had the ability to draw anything and pull it into reality. How stinking cool is that?

I will forewarn my fellow romance addicts – there wasn’t as much romance in this novel as I generally like. The main characters definitely have something going on, but it doesn’t really turn into anything just yet. Given the cliff hanger ending, I’m eager to see how their romance progresses.

I did, unfortunately have to give Renegades 4 stars instead of 5. While I enjoyed the characters and the world building, I found the book far too easy to put down. It actually took me almost a week to get through (practically an eternity for me) because every time I picked it up I only got through a couple of chapters. I honestly felt as though this book was the set up for an INCREDIBLE sequel, one that I absolutely can’t wait to pick up.

My Takeaway: Renegades was an intriguing read with an incredible premise, but I found it easier put down than I’d like to admit. I felt as though this first book was a build up to an amazing sequel – one I will absolutely be picking up the minute it comes out next year.

Thank you Fierce Reads and Marissa Meyer for this review copy!

🎧 Audiobook Review 🎧
QOTD - What completed series do you need to finish reading?
QOTD - Favorite book with shifters? Don’t you dare say Twilight
These authors and their releases are being directly impacted by @barnesandnoble’s decision to only sell the top 2% of books from each publishing house. Please support them however you can, and remember to shop indie.
QOTD - Favorite book with Greek mythology?
QOTD - What book or series recently made you laugh?