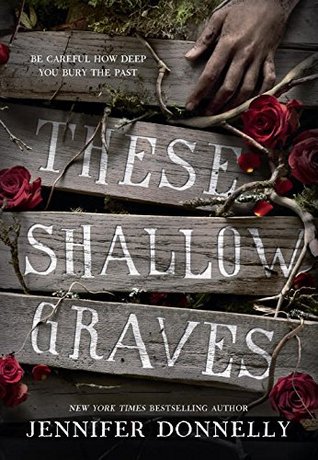 Jo Montfort is beautiful and rich, and soon—like all the girls in her class—she’ll graduate from finishing school and be married off to a wealthy bachelor. Which is the last thing she wants. Jo secretly dreams of becoming a writer—a newspaper reporter like the trailblazing Nellie Bly.

Wild aspirations aside, Jo’s life seems perfect until tragedy strikes: her father is found dead. Charles Montfort accidentally shot himself while cleaning his revolver. One of New York City’s wealthiest men, he owned a newspaper and was partner in a massive shipping firm, and Jo knows he was far too smart to clean a loaded gun.

The more Jo uncovers about her father’s death, the more her suspicions grow. There are too many secrets. And they all seem to be buried in plain sight. Then she meets Eddie—a young, brash, infuriatingly handsome reporter at her father’s newspaper—and it becomes all too clear how much she stands to lose if she keeps searching for the truth. Only now it might be too late to stop.

The past never stays buried forever. Life is dirtier than Jo Montfort could ever have imagined, and the truth is the dirtiest part of all.

HAPPY NEW YEAR LOVES!! I hope everyone had a great start to 2018! I’m proud to say that I’ve already finished my first book of 2018…and it was not this one. It was a romance. BUT this was my final book of 2017, so that counts for something. I actually read this because my Instagram book twin Kelsey found it and recommended it. Its a 484 page book and we both finished it in one day. A work day for me even. That tells you how good it was!

As previously mentioned, this was a quick read for me! Every time I tried to put the book down, it called to me. I ended up staying awake until 5am to finish it because i just couldn’t put it down. It was so well paced, and such a great mix of romance, character growth and mystery. The mystery was very intricate and multi-faceted, the bad guy was heavily featured in the book, and his motives were clear and understandable. The murderer was actually a character that I quite liked for the majority of the book.

I had a very love/hate relationship with the romance aspect of These Shallow Graves. It basically all took place within the first half of the book. The two characters fell for each other pretty quickly, which is never something I love. However, their love story gave me tingles and butterflies and all of the warm fuzzy feelings I expect from a romance. What really bothered me about it, unfortunately, was that their major source of conflict could have been easily avoided if the main character, Jo, had just stopped to think for a moment. I was honestly frustrated with her throughout a majority of the book because she was so back and forth on things.

Overall, the mystery was great, the pace was fast, and the romance, while at times frustrating, was overall really sweet. The book does leave the HEA a little open ended, but it made sense to me. I won’t lie, I would’ve liked an epilogue, but I’m content with he way things wrapped up.

My Takeaway: These Shallow Graves is a must read for fans of romance, murder mystery, and historical fiction. It was humorous, chilling, swoon inducing and gripping all at once. Just trust me, this book would be a GREAT way to kick off your 2018 TBR!