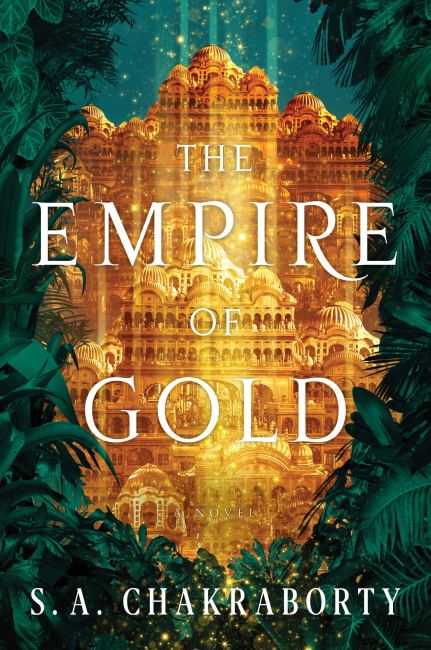 The final chapter in the bestselling, critically acclaimed Daevabad Trilogy, in which a con-woman and an idealistic djinn prince join forces to save a magical kingdom from a devastating civil war.

After a brutal conquest stripped the city of its magic, Nahid leader Banu Manizheh and her resurrected commander, Dara, must try to repair their fraying alliance and stabilize a fractious, warring people.

But the bloodletting and loss of his beloved Nahri have unleashed the worst demons of Dara’s dark past. To vanquish them, he must face some ugly truths about his history and put himself at the mercy of those he once considered enemies.

Having narrowly escaped their murderous families and Daevabad’s deadly politics, Nahri and Ali, now safe in Cairo, face difficult choices of their own. While Nahri finds peace in the old rhythms and familiar comforts of her human home, she is haunted by the knowledge that the loved ones she left behind and the people who considered her a savior are at the mercy of a new tyrant. Ali, too, cannot help but look back, and is determined to return to rescue his city and the family that remains. Seeking support in his mother’s homeland, he discovers that his connection to the marid goes far deeper than expected and threatens not only his relationship with Nahri, but his very faith.

As peace grows more elusive and old players return, Nahri, Ali, and Dara come to understand that in order to remake the world, they may need to fight those they once loved . . . and take a stand for those they once hurt.

Why, oh why did I want to read this book early? Don’t get me wrong, I LOVED it so much, but not being able to talk about it is physically hurting me. I have literally texted friends begging them to let me divulge spoilers (Joleen, you da real MVP). Now, I’m going to write a spoiler free review…it may be short as I try to avoid the hell out of oversharing. I placed a warning in my header, but I want to reiterate – do not read this review if you haven’t already finished The City of Brass and The Kingdom of Copper!

S.A. Chakraborty has destroyed me. Over the course of 400+ pages, she ripped my heart out of my chest, stomped on it, and then somehow managed to carefully put it back together. The poor battered thing has some bandaids on it, but its thankfully still beating. The romance was absolute perfection. Over the course of this series, I have shipped Nahri with Dara, and then Ali, and then Dara again, and then…well you get the point. When I started Empire of Gold I genuinely had no idea how Chakraborty could possibly write an ending that would ensure that all characters involved got what they deserved. Somehow, she managed it. In the end, I genuinely believe that Nahri ended up with the person best suited to her.

The best part about this series though wasn’t the romance. It was the character development. I can’t stress enough how much these characters have grown over the course of the trilogy. Ali, Nahri and Dara all went through so much and came through it all completely changed for the better. Hell, even Muntadhir grew in ways I didn’t see possible. Somehow Chakraborty managed to change and grow not only the main characters, but also a huge group of supporting cast that I found myself deeply caring about by the end.

Empire of Gold wasn’t an easy end, and I cried more than I have in a long time, but it finished in a way that left me satisfied. All loose ends were wrapped up, every character’s ending was deserved and well thought out, and the series wrapped up on a hopeful note. I can’t wait to read what S.A. Chakraborty writes next and genuinely hope that she revisits what has become one of my all time favorite fictional worlds.