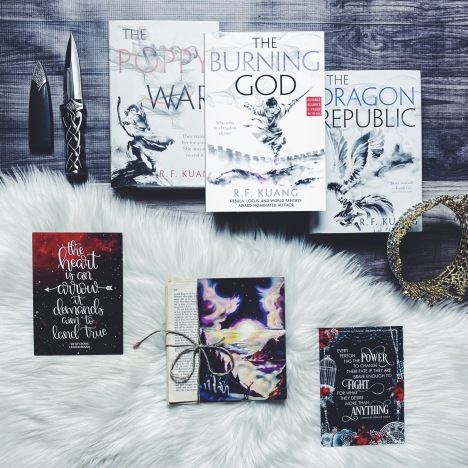 The exciting end to The Poppy War trilogy, R. F. Kuang’s acclaimed, award-winning epic fantasy that combines the history of twentieth-century China with a gripping world of gods and monsters, to devastating, enthralling effect.

After saving her nation of Nikan from foreign invaders and battling the evil Empress Su Daji in a brutal civil war, Fang Runin was betrayed by allies and left for dead.

Despite her losses, Rin hasn’t given up on those for whom she has sacrificed so much—the people of the southern provinces and especially Tikany, the village that is her home. Returning to her roots, Rin meets difficult challenges—and unexpected opportunities. While her new allies in the Southern Coalition leadership are sly and untrustworthy, Rin quickly realizes that the real power in Nikan lies with the millions of common people who thirst for vengeance and revere her as a goddess of salvation.

Backed by the masses and her Southern Army, Rin will use every weapon to defeat the Dragon Republic, the colonizing Hesperians, and all who threaten the shamanic arts and their practitioners. As her power and influence grows, though, will she be strong enough to resist the Phoenix’s intoxicating voice urging her to burn the world and everything in it?

It will never cease to amaze me that R.F. Kuang began this incredible trilogy when she was only 19 years old. At that age I had just discovered my freedom from my parents and was in no way shape or form in a position to write a book. Not only did she provide us with a grimdark trilogy that I had no idea I needed in my life, she managed to improve upon her craft with every novel written. The Poppy War and The Dragon Republic were both incredible, but The Burning God was, in my opinion, the shining star of the trilogy.

Rin as a chracter absolutely astounded me. Her resilience, her stubborn will to not only live, but to win, and her determination to get her revenge by any means necessary all blew me away. She grew over the course of the series into a woman who was somehow equally terrifying and an inspiring testament to the feats you can achieve with willpower alone.

While Rin wasn’t the character that I liked the most (that honor will always be reserved for Kitay), she was a character that I felt emotionally bonded to throughout the series. She made questionable decisions, and committed atrocities that I never could’ve imagined. However, the beauty of R.F. Kuang’s writing is that no matter what Rin did, I was always on her side. I was constantly rooting for her, even if it didn’t seem like the right choice to make at the time.

The battle and strategy sequences throughout the series were incredible, but honestly managed to blow my mind on a whole new level in this third installment. They were fast paced, and kept my heart pounding as I devoured page after page in a sheer panic. I felt the urgency of those scenes seeping through the pages.

Overall, this may be one of the best series endings I’ve read in a long time. The way that The Burning God ended just felt right to me. I closed my kindle and even though I was a snotty, sobbing mess, I felt completely satisfied with the way that things wrapped up. I genuinely can’t wait to see what R.F. Kuang has in store for us next.

QOTD - Who are some of your top auto buy authors?
Hi @hellolovelybox ! I’m SO excited for the chance to shoot my shot - I love your shop and would be so thrilled to rep for you!
QOTD - What’s the last book you read and what did you rate it?
QOTD - What will you be reading this weekend?
QOTD - What genre have you been reading the most of recently?
QOTD - Are you planning to pick up any new releases this week?